Have you ever heard of Steve Jobs? It’s a silly question, I know. Everyone has heard of Steve Jobs, the man who transformed an entire industry, created the iPod, iPhone, iPad, the Mac – products that are indispensable to our daily lives. We know him today as one of, if not the most successful entrepreneurs in modern history.

Prior to Steve Jobs becoming known as the great success that we remember him today, he actually endured an epic failure in business. He was kicked out of Apple in the mid 1980s, due to the failure of several products. I?m not going to go into too much detail on Steve Jobs? failures. You can read more about those in an earlier article I wrote, called Permission to Fail.

What I want to offer you today is a very simple question. What would have happened if Steve Jobs called it quits after failing early in his career and getting ousted from the company he spent the first part of his professional career building?

Let?s set the stage for a moment, so you can consider this question with proper attention. Steve Jobs founded Apple in 1976 with his close friend, Steve Wozniak. They built it from the ground up. They led the company through a successful IPO. And after nearly ten years of public success, and transforming an industry Steve Jobs was ousted from the company he founded because of management failures within the company he built.

That must have been an incredibly painful time in his life. I know it would have been for me. So, what if Steve Jobs called it quits in 1985, hung up his entrepreneur hat and lived out his life in retirement. He very easily could have. He was young, incredibly wealthy (his net worth was estimated over $200M at the time), and he would have been entirely justified to slip into a life of leisure, doing whatever he pleased for the rest of his life. I don?t think many people would have blamed him for choosing that path.

If Steve Jobs allowed his early failures at Apple to deter him, these would have been just a small handful of the results:

Most obviously, we wouldn?t have iPods, iPhones, iPads, iTunes or the app store. That alone is nightmarish to think about. A zombie apocalypse would be more inviting.

We would never have been able to see Toy Story, Finding Nemo, Monsters Inc. or any other Pixar film. That?s because after Steve Jobs? departure from Apple in 1985, he used $70 million of his own money to buy Pixar from Lucas Films and turn it into one of the most successful film companies ever. As of 2019, Pixar?s films have grossed over $14 billion worldwide (adjusted for inflation). One of the unintended outcomes of Jobs being fired from Apple is that it freed him to pursue new things. How it unfolded wasn?t his intention and it certainly wasn?t his choice. But the circumstance that he was forced into after being fired from Apple opened up an entirely new horizon of opportunity. He sold most of his Apple stock and put his own personal money into building Pixar. Had he not failed at Apple in the early 1980s, and had he not been fired from Apple, Pixar would probably have not been something he pursued. His failure at Apple, led him on a new path, which opened a new opportunity for himself and led to an incredible contribution to the world of filmmaking and entertainment.

Had Jobs thrown in the towel we might not even have the internet. Gasp! Yes, you read that correctly – the friggin World Wide Web. The first website that was ever published on the World Wide Web was done by Tim Berners Lee using a Next Computer. Next is the computer company that Jobs started after being ousted from Apple. He spent 1985 mourning the loss of his life at Apple and doing some soul searching. This is what I refer to as the ?mourning? period following a major failure. It is an essential part of the failure process that you must go through in order to effectively recover and move on. It is a critical part of the Anatomy of Failure. After Steve Jobs went through his season of mourning his loss of Apple he jumped right back into the ring and founded Next computers, which led to Pixar, and then ultimately his return at Apple. Apple bought Next in 1996 for $450 million, which led to an interim consulting position at Apple for Jobs, and ultimately led to his returning as full time CEO.

The rest of the Apple story, as we know it today, is history.

Before the success, however, Jobs had a choice: accept failure or decide what new thing to do next. The decision was his to make. And that – the decision – is ultimately at the heart of what I like to refer to as The Anatomy of Failure.

The Anatomy of Failure

There are 5 components to the anatomy of failure: 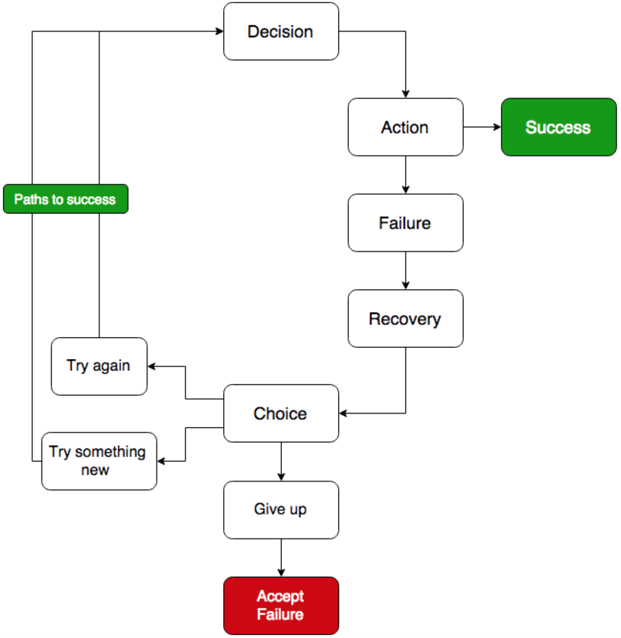 “I’ve missed more than 9,000 shots in my career. I’ve lost almost 300 games. 26 times I’ve been trusted to take the game’s winning shot and missed. I’ve failed over and over and over again in my life and that’s why I succeed.”

The Anatomy of Failure is a looped system. It begins and ends with a decision. Before you fail you set out to do something by making a decision. After you fail you have a decision: to give up and accept failure to move on. The choice is yours.

Before you arrive at an action and before your failure comes a decision. The decision is when you resolve to set out and do something. Whatever that something actually may be is entirely up to your own personal desire and goals. Decisions can either be big or small. Depending on what you are pursuing, decisions can take a long time or happen frequently throughout your day.

As an entrepreneur, I?m wired in such a way that I am constantly coming up with business ideas. I can?t help it. It?s in my DNA to think this way. I see opportunities everywhere I look. I have entertained dozens upon dozens (if not hundreds) of business ideas. Most of the ideas remain as ideas without any action behind them. But I?ve planned out many of them in my note pad. And I?ve even created business plans and presentations for dozens of my ideas. But I have only taken action on some of them; the really good ones that appeared most viable and aligned to my interests.

Having a good idea and not pursuing it is not necessarily a bad thing, unless that is a pattern in your life. If it is a pattern I would recommend you look introspectively and ask yourself why that might be the case. For many, who choose not to pursue their ideas or their passions, it is often out of fear. Most commonly that is the fear of failure. If that is the case for you, I give you permission to go forth and fail. You just might succeed along the way.

Before there is any action, and before that action either turns into success or failure, there must be a decision. You must decide to do something. And those who decide never to do anything don?t fail necessarily, but they never truly live. You can live life as a hermit, never going outside, and never attempting anything and at the end of your life you track record will be clean and clear of failure. But what would you have accomplished? Nothing. And a life without trying is failure by default.”

“It is impossible to live without failing at something, unless you live so cautiously that you might has well not have lived at all, in which case you have failed by default.”

Decisions to take a big step can take time to incubate and launch into action. For instance, the decision to start a company, might take months or years before that idea turns into a decision to take action. You might brainstorm hundreds different business ideas and plans before you finally decide to step out and launch that company.

Say you do experience a failure in life, we all do, it is going to happen one way or another. The most important part of the failure process, and what separates successful entrepreneurs from unsuccessful entrepreneurs, is taking the proper time to recover from the failure. The recovery period is critical to the ultimate outcome of the decision and what choice you will make next in life.

According to Anna Johnson, a writer at Entrepreneur, it is really important to spend some time reviewing the events that ultimately led to your business failure. The motivating factors behind your business?s demise will be obvious (such as a shortage of cash, or a major client that fell through), but it?s important to be comprehensive and study the precipitating factors that led to those outcomes. This will help you not only find peace about the failure of your business, but teach you key lessons you?ll need as you build your next entrepreneurial venture.

How you process the failure and allowing time to recover from it emotionally, physically, and often times, financially, will determine how you respond next. So, what will you do when you set out to do something and it fails? Will you accept ultimate failure or make the decision to try again or try something new?

For many, who choose not to pursue their ideas or their passions, it is often out of fear. Most commonly that is the fear of failure.

This article was written by Matthew Bell, founder of Startup Revival and author of The Kingdom-Empowered Entrepreneur, which is now available at Amazon.